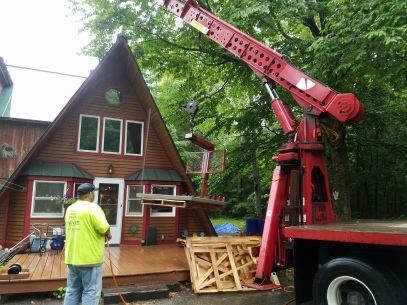 We had examined the battery market, deciding what type (lead-acid, or lithium-ion) battery we wanted here at Birchwood, and in the end had decided that the battery market was completely whacked, and needed time to settle-out into a more reasonable price range. As a result, we intended to feed our solar power to the utility grid, using the grid itself as our “backup power source” for when the sun was not available.

Then one day, our first solar contractor (who we fired – read about that here), mentions to me in a casual, passing way, that whenever the grid goes down, our solar array will detect that fact, and automatically shut itself down.

What the actual fuck??

“No no no”, I said confidently. “When the grid is down, I want a big switch I can throw that diverts my solar array power directly to my house”.

Well it turns out, that is not so simple. In fact, it violates code. The utilities have rigged it so that if you are feeding solar power into their grid, and that grid goes down for any reason, your solar array has to have an automatic cut-off to shut itself down until the grid comes back online. They claim this is so that you are not feeding power into the grid during a disaster-recover scenario. I think it is to make it as inconvenient as possible for those customers moving towards solar power as an alternative. Lesson learned, fuckers.

Having quickly realized that we would not be able to draw power from our own array if the utility grid was down, we decided that if one of our stated goals was to not have to rely on the utility grid for power, (but to be self sufficient from it), we were going to have to buy a generator. And a little one just would not do.

One thing that made us different from most folks who invest in a generator, is that we wanted one that would simply run everything. Not a subset of our appliances, or a portion of our home. Every. Damn. Thing. I will talk more about that in another post. Suffice it to say that this meant we needed a generator that could produce enough power to run our entire house.

This was apparently a concept that was foreign to well, just about anybody we discussed it with. It seems most folks just settle for running a subset of their lives when the grid goes down. Not good enough for us.

And so, we started shopping. I am not going to go through a blow-by-blow of every feature comparison and price-point we examined as part of this project. Do your own damn research. But I will tell you in the end we settled on a Briggs & Stratton ‘Whole House’ stand-by generator – the kind that turns itself on automatically whenever the grid goes down. This was a necessary feature for us, as we travel sometimes for weeks at a time in the winter, and need to ensure that the house has power no matter what is going on with the grid.

Ordering the generator and having it delivered (it is the size of a standard chest freezer) was not the hard part. The real struggle was having our local electrician install it and connect it to our house. This turned out to be yet another struggle that we had not anticipated, and ended up taking most of the entire summer of 2018 to get accomplished.  More about that struggle in a future post.

One pleasant surprise came about from this process. Our new generator runs on standard LP gas. We already had a single 30-gallon tank attached to the house to run the gas stove in the kitchen. We had to call the propane company to coordinate them showing up to make the connection from that tank to the new generator.

However, when they heard that we were installing this big fancy generator, they did not

want to connect it to our existing 30-gallon tank. Instead, they wanted to come out and install TWO 60-gallon tanks instead. Enough LP gas to run our generator 24/7 for a month. At their expense.

So without even knowing this part was going to happen, we ended up with enough fuel onsite to run our whole-house generator around-the-clock for a month. Bring it on winter ice storms!

The lesson learned here? Don’t let anybody tell you what you need or want for your own home. Just because ‘everyone else does it this way’ does not mean you have to follow the same path. Homesteading is what YOU want it to be. What it looks like to YOU is all that matters. At Birchwood, when the Grid goes down, we wait for 30 seconds, and the generator kicks on. Life goes on as if nothing had happened. The way life should be.

Who Writes For This Blog: